Biography Of Shreya Sitoula: Everything About Shreya 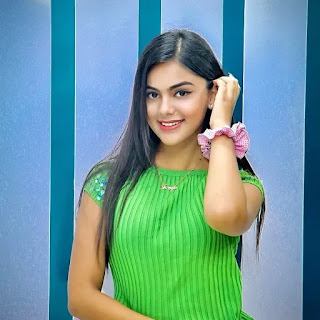 The younger lady from Nepal who was popular once as an Indian TikToker by thousands of Nepalese is not other than Shreya. Shreya is one of the new and youngest tiktoker from Nepal.
Although she is one of the youngest and most followed ladies from Nepal many of us unaware of her reality.  So, here we are with you to know all about the Shreya Sitoula Biography.
Nowadays Tiktok is playing a vital role in creating the 100 and 1 percent creators and actors from worldwide. No doubt, TikTok has provided itself as a powerful and amazing platform to find out the acting skills of every people who are in search of the platform to show their talents.
Here we got another daughter from Nepal who was able to stand her life with around 1 Million live followers in her TikTok till the date. We are with the next Beauty and acting Queen Mrs. Shreya. Let me explain the Biography of Shreya Sitoula. We got that her childhood life was spent normally and happily. When we go towards her adolescence age part then in that time her life got a lot of changes. At that age, she got a different opportunity to make childhood better.
Coming to her education then she is running her +2 Intermediate Degree from NEB Board. She is handling the two major parts of life these days. She seems more active in her educational part these days by separating some time on her TikTok videos.
Also Read: Sudhir Shrestha Biography

The Journey to TikTok

In her previous days, she was not totally interested in TikTok. Before her TikTok Journey, she used to spend her days with the family, studies, and friends. With a lot of recommendations and requests from her pals finally, she downloaded the App from the Play Store.
With a lot of recommendations and motivation from friends, she started to create a video. The first video uploaded by her can’t get sufficient reach. That’s the first negative impact that tries to demotivate her.
Finally, after a few days, her videos got a free boost. Yes, after that she is climbing the ladder of success without obstacles and finally able to win millions of followers. Due to the lack of a good camera phone, she had to compromise in her TikTok journey. It’s true that in recent days she can’t able to manage the good phones to continue her journey to TikTok.
Besides this, she also had to be sad due to the malicious comments published by her fans in the comments section. Shreya shared the real event regarding this. She had to be hurt a number of times due to such unrespected and despise words.
Not only that she also cried once due to this kind of comment. Despite getting so many such hurt and insulting comments, she did not give up and finally hit the target of success.
Also Read: Garima Sharma Biography Shreya is one of the biggest fans of Pradeep Khadka and Paul Shah. With a great interest in watching Nepali movies, her aim also moves towards the movies industries. It means she had set a goal to be an actress and shares the screen with her favorite and dream hero like Paul and Pradeep.
In an interview with the Smart Tv Youtube Channel, she clearly mentioned having an aim of sharing the screen with the Paul Brother. Although she is not aware and knows the acting skills her aim seems comes trues in the upcoming days.
Besides this, she uses to love the watch movies, listen to songs, reading books, etc.
In terms of relationship she clearly mentioned she is still single and not thinking of any such relationships at this time.
In that interview, she mentioned although she used to get a number of comments and messages regarding the proposal she neglects these all. Because her aim is limited to be a focus on study and career rather than the untrusted relationship.

In terms of fan following Shreya holds the supreme position among the various creators from Nepal. Within a short time, she had boosted her TikTok ID all over the Nepal and Indian users.
Yes, she was able to meet the Maximum number of followers that going to meet around 1 Million. She is one of the most following creators from Nepal.
Her real acting and video over the cute music clips make her more attractive towards her videos. For this, she had done a lot of struggle. After uploading the daily videos she was able to win that position.

Some Facts Of Shreya Sitoula

Shreya is much beautiful as like her talent. Personally, I am one of the biggest fans of her and used to keep on following each and every content for her. Also, here aim to be a good actress may comes true.
This is all about Shreya Sitoula’s biography, wiki. I hope you like this biography. Comment below if we missed anything in her biography. We want to wish for god for her bright future.
January 16, 2022