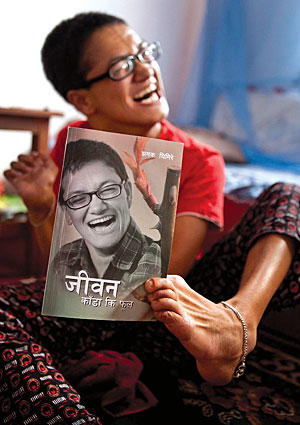 
The lady who was born with Cerebral Palsy and writes with her left foot had contributed a lot to Nepali novels and columnists. She is one of the most struggling ladies who has been awarded the Madan Puraskar for her beautiful contribution to Nepalese Literature. Here’s the Jhamak Kumari Ghimire Biography, Wiki, and Her Life Story.

Jhamak Kumari has contributed her best effort to rise Nepalese Literature. She contributed her auto-biography ‘Jiwan Kada Ki Phool/ Is Life a Thorn of Flower’ which makes millions of readers know the real life of her and every person.

Born with cerebral Palsy she had to cope with the challenges at every step of life. Jhamak Kumari had spent his life full of struggle. To born with cerebral palsy is one of the biggest challenges for her. But from such struggle and challenges, she got a way to get alive.

So, now she had contributed several pieces of literature in Nepali. Even with his physical disability, she didn’t lose hope to get survive and follow her passion until her last breath. She used to write with her left foot.

Besides the most well-known literature Jiwan Kada Ki Phool she had written other literature like Sankalpa, Aafnai Chita Agni Shikhatira, Quaati, etc.

In 2037 Ashad 21 (Friday) Jhamak Kumari was born as the elder sister of the family. She was born in the father Krishna Bahadur Ghimire and Mother Ashadevi Ghimire’s house. The life of Jhamak was full of struggle from the day of birth.

As a physically disabled lady despite the weak financial condition of the family, she had to cope with the challenges at every step of life.

Born with a disabled body she was used to being hated by all for his body structure. Also, she used to be called Murkatta by her people and other relatives.

With such unfavoured conditions, she used to receive the blessing of the dead from her elders on Dashain tika. It was one of the worst to hear from anyone. But she learned a life lesson from these all events that makes her more strong and burns the lite to be born and to do something.

Also, she used to get scolded for several old Nepali beliefs that make her life more difficult to survive in front of society. In short, her childhood life was full of struggle and difficulties.

Jiwan Kada Ki Phool/ Is Life a Thorn of a Flower

It’s one of the most remarkable literature of her life that has abled to be titled with the most reputable award in Nepali Literature, Madan Puraskar 2010. With the real configuration of her life in the poem, the scripted Nepali film is also on the calendar to be released.

Titled ‘Jeevan Kaada Ki Phool’ the movie director Binod Bista released the trial of the movie on 28th August 2019. In the movie, the director tries to show the life of Ghimire and also shares the real story to live it again with the Nepali audience.

This was beautifully composed literature that represents the heart-shattering struggles of such women.

Her Contribution to Nepali Literature

From her life (Biography of Jhamak Kumari Ghimire) we got a lot of lessons to live and something in our life. She started to write the poem at 19. In that days she used to write poems, literary songs, and short stories representing social evils and their bad practice.

Her stories and literary songs are used to expose the discriminatory approaches including the message to kill out the society from these all. Besides this, she contributed some beautifully arranged poetry to Nepali audiences. Sankalpa, Aafani Chita Agni Shikhatira (Own’s funeral pyre toward the fire apex), Manche Bhitraka Yoddharu (Warriors inside humans), Quaati, etc. Those who are highly honoured in Nepali Literature.

Additionally, she worked on the Books like Awasan Pachhiko Aagaman (Arrival after the death), to contribute to Nepali Literature.

To encourage and promote literary art the Jhamak Ghimire Literary Arts Foundation has established five years ago in Dhankuta. This foundation is established to contribute towards Nepali literature in the Name of Jhamak Kumari Ghimire.

How was jhamak ghimire’s childhood?

She spends her childhood in Dhankuta fighting the struggles and blessings of death for her miserable physical disability.

What is the jhamak kumari Ghimire mother’s name?

The mother name of Jhamak Kumari Ghimire is Ashadevi Ghimire.

Why is Jhamak Ghimire famous?

She is a Cerebral Palsy writer who’s well known for her autobiography Jiwan Kada Ki Phool.

Jhamak Kumari Ghimire never got disappointed with her disability. With a lot of challenges from birth till now, she had learned a real-life lesson and got the way to get alive with struggles too. She is one of the highly honoured Writers and Columnist whose contribution is always to be remembered.