Biography Of Samikshya Adhikari: Everything About Samiksha 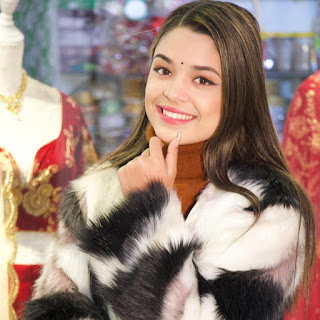 As like her name we can find the same level of qualities here. She is one of the best singers to get such a beautiful and lovely voice that we all the audience want. Adhikari was born on the 3rd day of August of the year 2005. As per the 2021 recent date she is now running at the age of 16 years.
We can say that Samikshya is one of the first adult singers with a huge number of fans. She is from the Pokhara. As per information she was born in the village of Lahasur lies near Pokhara city. That’s why the audience knows her as the girl from Pokhara.
The age of her is not so far. We can find that she is continuing her educational carrier with his singing. This year she is in the 10th standard from the United Academy Secondary School of Pokhara city.
Talking about Samikshya Adhakari height, we can guess that here height is around 5ft and 2 inches. Talking about the face type then we can find it’s round with curry brown hair including the sweet smile on her face. Here we are narrating the biography of Samikshya Adhikari. Talking about her education then we have already mentioned that she is in the 10th standard from the United Academy Secondary School. So, let’s move towards her primary school journey.
When she was a child she used to get an education from the Shree Mahendra Secondary School from the same locality. An educational journey was good and normal. In school-age, she doesn’t use to be more passionate about singing as like now.
It is said that the movie ‘Pardeshi’ songs is the biggest inspiration for her. After listening to the songs from that movie the life of Samikshya gets to turn into a new model. Here now she started her journey in the musical field. After that, she used to keep on singing songs everywhere (School, House,).
To maintain both the educational part and musical arts at a young age is one of the major specs found on her. Also now, she is giving an equal priority on both study and Music.

From the different sources, we have found the 4 members of her family. But we’re not getting any information related to her father. Including her, there is two children from the family. Girl Adhikari has one elder sister named Sarmila Adhikari. The most popular song among the child and females in the Nepali music industry is not other than the song, Balapan Ko Umera. Balapan Ko Umera from the movie Nai Na Bhannu La Sequel 5 made by Sir Bikash Raj Acharya is one of the major efforts that uplift the carrier of Her.
It is said that at the time of the shooting of the Movie, Chakka Panjja 2 the team has found her singing the song. The team Chakka Panjaa is one of the means that makes the music transportation journey of Samikshya Easy.
As per the requirement of the little female singer for the song ‘Balapan Ko Umera’ the popular Musician Sir Basanta Sapkota offered her for singing the song. The team Chakka Panjaa, Sir Basanta, and Nai Na Bhannu La are the major hands for her today’s life and condition. The songs from the movie ‘Pardeshi’ is one of the main inspiration for her musical journey. After that, the attraction towards music gets bond tightly. That’s why we can find many videos of singing her. After that, she uses to get more popular.
In fact, social media and word mouth publicity make her one of the rising stars in the Nepali music industry. After many videos on social media, she got an opportunity to sing the song ‘Balapan Ko Umera’ composed by Basanta Sapkota. That’s the first song of Samikshya Adhikari.
After that, she sang the song titled “BABA”. But she can’t get the success as like the Debut song. After that, she had also song many other songs. Among them, the most popular song after Balapn Ko Umera is ‘Maya Marera’ and ‘Sohra Salaima’.
Also Read: Smita Dahal Biography

Samikshya Adhikari also includes her hobbies and relationship. Samikshya used to love reading books and magazines. Besides this, she is also interested in dancing. And mainly as being the singer she definitely loves the singing.
Talking about her personal relationship then we can’t find any information to show to you. Anyway, it is better to be alone at this age.
Recently there are affairs between paul shah and samikshya adhikari which went viral on social media.

Some Facts Of Samikshya Adhikari

Note: All information is taken from Wiki/Youtube. If you wanna remove anythings and belongs to you please contact us before taking any action. Image Credit: Facebook.

From the Samikshya Adhikari nepali singer biography, we have tried to roll out the possible information and life events of her. Besides this, we have also included the personal lifestyle, family, education, and many more about the rising star Samikshya.
February 24, 2022