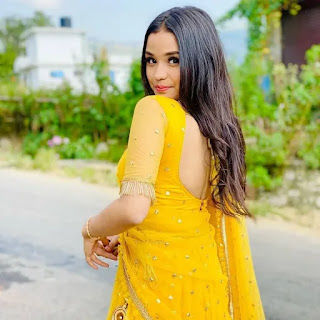 The history of Tiktok is not so far as like Facebook, because the Musically born/ rebrand this platform as Tiktok to explore the universe with short exciting, funny and video over voice process. Due to this the millions of users all over the world got the platform to show their hidden and disrespected talents.
Here we are with another Nepali TikTok star who gives an introduction to whole TikTok users of Nepali with amazing videos over the music. Let’s read out the Gurans Dhakal Biography.
On the Biography of Garima Sharma, we have already mentioned the Tiktok as the platform for everyone to give up an identity to their talents. In fact, this is the true reason Gurans Dhakal got success and the thousands of fan following in a short time.
The adolescent lady who used to live in Dubai, UAE gets back to the world of entertainment with her talent. She had played several TikTok videos and already gained millions of views from the fans and following. Gurans Dhakal is from a small family. Altogether there are 4 members of her family including her. Among them, they used to live as 3 members. As in a brief interview, she mentioned she is happy with a small family.
Talking about the education then she had completed her education journey up to the secondary level. Regarding this, she has recently joined the Higher school for her up the educational journey. In terms of education and ability, she was good from childhood.
In another hand, childhood was also good. She spent her childhood life happily with the family. Now she used to spend her time on personal hobbies. Besides this, she also used to engage in acting on TikTok music videos with her lovely kid sister, Aayushi.
Also Read: Shreya Sitoula Biography The TikTok journey of Gurans was unexpected. She can’t just imagine such a future trend of her actions towards this platform. Regarding the success behind this, she used to mention and bring the contribution of her mother to the top.
After the re-arrival of Musically as Tiktok both of the sisters (herself and her younger sister Asyushi) created a Tiktok video. They can’t get any response and positive signals.
After making a few videos she got gained likes, fan following on her account. After that, she uploaded better videos. She used to post videos in her both official and sister id.
After the continuous contribution to acting over the Tiktok videos, Gurans achieved that level where she got several fan following and a chance to share personal stories with different people via the social platforms.

Gurans Dhakal belongs to that lady who applies the “Simple Living High Thinking” as the main mantra of life. Yes, she believes in her struggle and work. Because of this, she used to give her best to the fans and families.
She never tries to hurt others. Nor she discriminate against others. In terms of hobbies, she used to love singing, dancing, acting, and spending time with her child sister Aayushi. Regarding the relationship, she is still single.
Also Read: Sudhir Shrestha Biography She runs two Tiktok IDs to share the videos with her fans. On the first ID, She used to share the videos with her sister on @iamaayushi. Both of the sisters had done a lot of struggles to grab more than 450K followers in a short time.
With the support and encouragement and blessing of her mother, she including sister aayushi able to get such a fan following. Besides this Gurans has her official ID too where also she used to upload the latest videos on beautiful songs.
Personal/ Official ID: @gurans_official – 150K followers
With Sister: @iamaayushi – 450K followers

Some Facts Of Gurans Dhakal

Gurans Dhakal is one among young ladies climbing up to the path of success. In the short time, she had grabbed such a high level of fans following over Tiktok. We hope for her bright future with making her aim successful.
Share
Facebook
Twitter
Pinterest
WhatsApp
Previous article
Bhim Bista Biography, Wiki, Age, Girlfriend
Next article
Anshika Sharma Biography, Wiki, Age, Height, Boyfriend