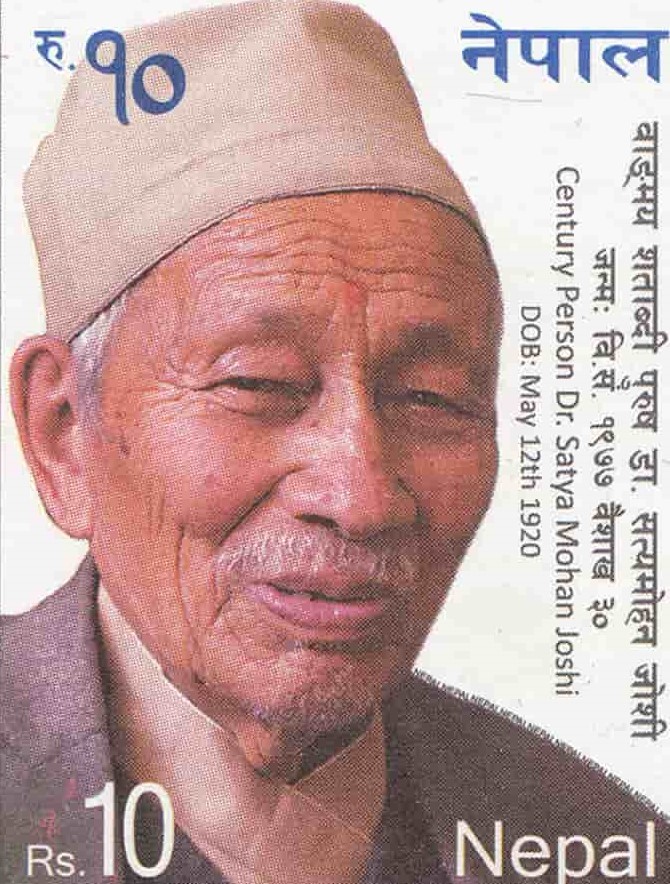 
Satabdi Purush Satya Mohan Joshi was one of the honored writers and Researchers who had contributed more than 60 publications in various fields. The man who had researched Araniko is no more at the age of 102. In his life, he had won the Madan Puraskar award the 3 times and others for his historical and cultural research about Nepal. Here’s the Satya Mohan Joshi Biography and life story.

Satya Mohan Joshi is one of the widely known researchers and writers who had written more than 60 publications. He’s one of the highly honored men from Nepal who had been recognized with a National Postal Stamp. In the Name of his recognition, NRB issued three new coins of Rs 100, Rs 1,000, and Rs 2,500.

Satya Mohan Joshi spent his 102 years contributing towards historical research and cultural foundation. He had served the Nepal Bhasa Academy as a Chancellor and Established the Rashtriya Naachghar in Kathamandu.

The man with a wrinkled face, white hair, and elder age had contributed his whole life to making the people aware of the culture and history. He had built up history again and made history like Youth.

His Beautiful line, ‘I’m not getting old, the world is just growing faster’ gives a clear meaning to today’s youth. With this line, he tried to immerse the knowledge of the language and guide the youth towards history.

An Enthusiastic and energetic Satabdi Purush Satya Mohan Joshi had done remarkable work to preserve the native language and culture of our society. Also, had performed several events and programs until his ability in the favor of the Nation.

With these all he had been awarded several titles and honors. With his continuous research, he had become the chancellor of Nepal Bhasa Academy. Also, he had built up the historical relationship with china by ascertaining the cloistered mystery of Great Araniko.

Joshi was born on the 12th May of 1920 in the home of Father Shankar Raj and Mother Ram Kumari Joshi. He was from the Lalitpur district and spend his whole childhood living there. Regarding education, his schooling was completed there, and later on move to Kathmandu.

He enrolled at Durbar High School in Kathmandu and complete Higher School. Later on, Joined the Trichandra College for the BA. At a small age, he got married to the Radha Devi Shrestha.

The chancellor of Nepal Bhasa Academy promoted the preservation of the Native Language. He is one of the men who had ascertained the cloistered mystery of great Araniko and built up the relations with china on that day.

In China, he taught the Nepali at Peking Broadcasting Institute. After ascertaining the cloistered mystery of Great Araniko he set up the Araniko White Dagoba Gallery in Kritipur, Kathmandu.

He was the first director of the Archaeological and Cultural Department in 1959 where he contributed to the Nepali culture. He established the Rashtriya Naach Ghar, Arachelogical Graden, and others.

For the preservation of Nepali culture and Native languages, he used to take participation in different cultural events before his demise. Besides these, he made his own identity by contributing more than 60 publications in Nepali literature too.

The man who used to have the dictionary of 30 Languages had created more than 60 publications. Here are some notable publications of him,

In the name of Satya Mohan Joshi, the Government of Nepal has issued the National stamp in 2021. showing is a portrait photo the Government has issued the National Postal stamp value of Rs 10 with 1,00,000 copies. Similarly, for his recognition the Nepal Rastra Bank has also issued new coins of Rs 100, Rs 1,000, and Rs 2,500 showing his portrait image on the occasion of a century birthday.

It was the biggest honor to Satya Mohan Joshi by the government of Nepal on his 100th Birthday. Later on 2021, he becomes the first man to receive the Electronic Passport on the 17th of November 2021.

Similarly, for his owner and respect, Nepali Writer Girish Giri published the biography book titled Satyamohan on the 18th of March 2022.

The 102-year-old historian and cultural scholar are no more now. He passed away on the 16th October of 2022 at KIST Hospital. The three times Madan Puraskar scholar got died at the age of 102 years. The man of recognition has died after spending the long years of his life.

As per his wish, his body was donated to the same hospital for research and the funeral was accompanied by the whole state parliament. On the 18th of October 2022, the National Holiday was declared by the Central Government to mourn his death.

The man with colossal knowledge who had contributed his whole life towards the research and preservation of our culture is no more. He had spent his 102 years in favor of Native language and culture including his research. The man who ascertained the cloistered mystery of Araniko and the relations of Nepal and China make us feel proud.

From his biography (Biography of Satya Mohan Joshi) we will get the living message, ‘I’m not getting old, the world is just growing faster.