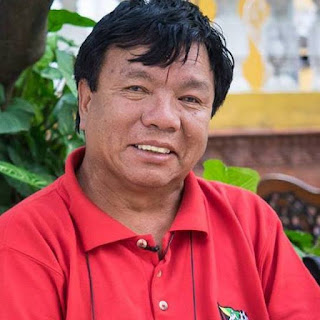 “Your dress and getup don’t decide on your brand. Your thoughts do”- Mahabir Pun. Like the name ‘Mahabir,’ his contribution to the development of technology and innovation for Nepal and Nepali is at the top ‘Mahan’. He is the first and only one person from Nepal to get such a glorious award and success due to his hard work and contribution.
Mahabir Pun is popular throughout Nepal with this unforgettable life-changing achievement towards the rural areas of our nation. He is the man to introduce Wireless Internet technology in remote areas of Nepal. That’s why he is also called the first development man in the tech and research field.

This article includes the childhood life of Mahabir Pun with his education journey. As being a child from a poor and rural village the life he was passed worst. As per information, the childhood of Mahabir pun was miserable.

He spent his childhood by involving in the household and other home related activities. In that time he used to spent his childhood grazing the cattle and animals on the field. The important thing is that he missed/deprived of school and education. His day to day life was around the animals and cattle but not with paper, pencils, and teachers.

After a time the life of Pun changed like an unbelievable dream. When his father gets retired from the Gurkha force he was taken to the low land of the country for making and investing in his education by their family.

From that time his life got a rapid change in educational development. He also started to work as a teacher after completing his higher-level education.
Khairahani Higher Secondary School was the first school of his life where he got an education. This school lies in the Chitwan district at that time. After completing this level he was totally focused on teaching for 12 years.

Here again for a further study he moves to the capital of the country (Kathmandu) and joined the Amrit science campus. During this time he learned different things and applies them to the development of rural areas. He completed his Bachelor’s degree (Bachelors in Science Education) in 1996 AD.

The continuation of education on Pun’s life can’t get end until the Master Degree. After the Bachelor’s completion, he moves towards the USA for further study and joined the University of Nebraska, Kearney. Finally, he completed his Masters in Educational Administration (2001).

The contribution done by Mahabir is a lot. His contribution starts from education to scientific development now. Yes, he is one of the multi-talent men who have contributed to the Nepali people in different fields and services.

At first, the contribution started in the educational field. He contributed as being a teacher for twelve years. Mainly his is Known for Introducing Wireless Internet technology in remote areas of Nepal, National Innovation Center.

Pun was the first Nepali man who has introduced wireless internet technology in rural areas of Nepal. This technology helps in the making internet affordable and online education simplicity to the people of remote areas.

Also, Pun used to teach computer classes to students and fellow teachers, but he fails to establish a telephone connection to the nearest city, Pokhara, and the Internet. That’s why he asked for help from the popular agency, BBC.

Mainly he contributes as much as possible to communication development. For making easy communication he had made the dish panel. Likewise, he got big help from donors and volunteers to bring the wireless connection between the Nangi village and other neighboring areas. With the help of handmade dish tv antennae mounted in tress, he had contributed to rigging the wireless connection on the rural part of that area.

As per wiki, “By 2003, Nangi had a wireless connection to the Internet. Later, Pun brought in more used computers donated from abroad, distributed them to other schools in other villages, and began work to develop a wireless distance-learning project supported by income-generating ventures.”

With an aim of providing non-profitable service in the development of innovation Mahabir registered the company/ organization, ‘Rashtriya Abishkar Kendra’ in 2012 AD. To make it easy to understand this center is also called as National Innovation Centre.

As per Pun, Fostering research and development for the economic development of the country is the main aim for establishing this center. In this center, there are being researched by the new innovation regularly.

There are a lot of awards to be mentioned in Mahabir Pun biography. With his contribution, he was able to win different awards. In 2002 he was elected as Ashoka Fellow by the Ashoka Foundation which was announced/organized by the Global Association of leading social entrepreneurs.

Likewise, in 2004 Mahabir received the Social Innovations  Award from the Hand of Global Ideas Bank. As per the Institute for Social Inventions, “Using an inspired mix of solar power, tree-based relay systems, and wireless technology, the project is helping yak farmers stay in touch, families communicate and, with an expansion into distance learning, children to gain the education.”

Besides, in 2017 he was awarded the Magsaysay Award, considered by some to be the Nobel Prize of Asia, in recognition of “his innovative application of wireless computer technology in Nepal, bringing progress to a remote mountain areas by connecting his village to the global village”.

Similarly, in 2007, the University of Nebraska awarded Pun an honorary degree as Doctor of Humane Letters for his outstanding work for Nepal.

We have found that he seems to be more active and frankly on Twitter. We have found the official Twitter page of him where he used to upload and share the day to day activities of his working fields.

Some Facts Of Mahabir Pun

I really loved his thoughts and especially I loved his all work which he is running in Nepal. His contribution not only helps the country, but his work also helps a lot of hidden scientists to show their creativity and invention from all over Nepal. I hope you love Mahabir Pun biography and let me know in a comment if I had missed something.
February 10, 2022