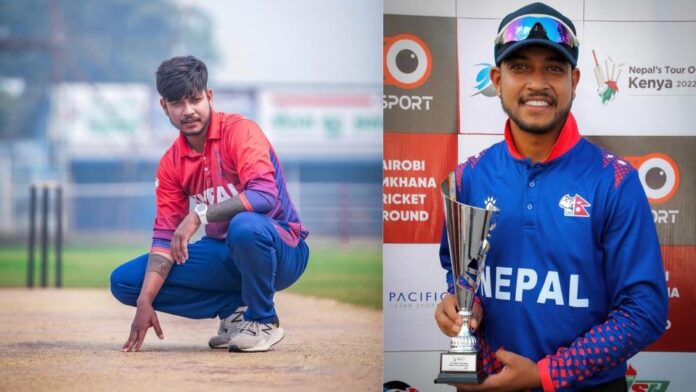 Sandeep Lamichhane is a Nepalese cricketer who owns the captain of the National Cricket team. He’s famous as a leg break bowler who had played the Under 16 (U-19) cricket world cup with the pick of 14 wickets from his side. Also, Sandeep is the first Nepali cricketer to participate in the Indian Premier League. Besides, here you get to know more about Sandeep Lamichhane Biography.

Sandeep is also known for holding the 5th bowler position in the Match of Under-19 World cup with five wickets against Ireland. Similarly, to get purchased for INR 2Million for the International match in Favor of India is another record he made in 2018.

Also, the holder of the top 10 players to watch in 2018 ranked by ICC (International Cricket Council) is a proud point for every Nepalese and his fan following. Besides this, all records of the Sexual abuse complaint registered against him also got him back in negative trend this day.

The young who started his journey as a teen had contributed to the Cricket Association of Nepal and India is honorable for our nation. Lamichhane is Nepal’s all-time top wicket-taker in ODI and T20I (Twenty Twenty International).

With his numerous records and mindblowing performance, he was named as the caption of the Nepali Cricket Team in December 2021 by replacing Gyanendra Malla. After all, his role in T20 Franchise cricket is rememberable for all Nepalese.

Sandeep was born on August 2, 2000. he’s from Aruchaur in Syanja District of Gandaki Province. With honor and interest in Cricket, he’s also called Sachin and Shane Warne by his friends and society.

As the morning shows the days, his childhood interest led to his career in Cricket. So, for this, he shifted to Chitwan to get training for the Cricket Academy owned by former Caption Raju Khadka.

Currently we can’t find the name of sandeep parents. So we can’t include names on Sandeep Lamichhane biography.

Later on, he was also offered for Hong Kong T20 Blitz in 2016 by Scott McKechnie to play for Kowloon Cantons Franchise in the Inaugural edition. Besides this fantastic performance, he picked seven wickets in the three matches in opposition with Touring Marleybone Cricket Club.

Similarly, the Hong Kong T20 Blitz is another turning tournament in his career. With his hitting performance, he ultimately turned out the meteoric rise for making his name Internationally.

Besides, the Letter from Officials of Former Australian Captain Michael Clarke for joining the hands to play with Western Suburbs District Cricket Club made another upliftment in his career, including all the Nepalese.

In the age of the wrist-spinner, Sandeep Lamichhanne from Nepal is one more exponent of the artist who has played a part in revitalizing it from the dead after the retired life of Shane Warne. The catchy name did the rounds with the IPL 2018 auctions as he made the background by becoming the initial Nepali cricketer to play the world’s most profitable organization.

T20I Tournament and His Role

Sandeep Lamichhane is the first Nepali cricketer to be included in the list of Players for auction in the Indian Premier League list for the year 2018. With an offer letter from Delhi Daredevils, he becomes to first Nepalese cricketer to get an opportunity to build up a bond with India and the fame of Nepal to the world.

Later on May 2018, he played as the senior T20 Bowler in IPL for Delhi Capitals. His 25 wickets in the debut match against the Royal Channalgers Bangalore is one of the surprising and jaw-breaking points for the audience.

Besides this, he contributed and named different heads during the IPL. Also, besides his gift, it was a huge learning curve for him to get his first Golden Opportunity as being Nepali.

Recently, Sandeep signed a Worcestershire for T20 2021 in England but was denied for internal reasons. Also, in July 2022, he was roasted by Dambulla Giants for Lanka Premier League third edition.

Sandeep Lamichhane was awarded for his economical bowling and took the most wickets in the tournament, taking 17 wickets in six matches with ICC World Cricket League Division Two Player.

He lives in Kathmandu and spends his life there. A sportsman spends most of his time practicing and playing games. Besides, she spent her remaining time with her family and friends.

Sandeep is running in the 22’s of her life. Regarding his relationship/ girlfriend, he doesn’t. He is single and enjoying a free life. Regarding hobbies, He loves Playing games, Singing, and Travelling. But a 17-year-old girl lodges a rape complaint against him, making him be Controversy right now.

A 17-year-old girl has lodged a rape complaint against him. The girl, in her grievance, has stated that Sandeep raped her on August 21 at a resort in Kathmandu.

As reported to police, on the eve of the Nepal cricket team’s Kenya departure on September 22, Sandeep Lamichhane asked her to go on a journey to Bhaktapur, and she agreed. As Lamichhane lingered, the small could not go to her hostel in Madhya Baneshwar in the evening.

According to the issue, the hostel closed at 8 pm, so the minor was compelled to spend a night with the 25-year-old superstar at a hotel in Pingalasthan of Kathmandu. The victim lady informed they stay in different areas, yet Lamichhane did not concur. Instead, he drugged her and raped her two times.

Sandeep Lamichhane’s Net Worth and Salaries

By profession, Sandeep is a Cricketer and a Captain of the Nepali Cricket Team. He had won many titles for his work and efficiency. Regarding his income, we are not sure. We will update his net worth and pay in the future.

Who is Sandeep Lamichhane?

Sandeep Lamichhane is a famous Cricketer and Captain of the Nepali Cricket Team.

Where is Sandeep Lamichhane from?

Sandeep is from Syanja District; later, he moved for training to Chitwan; right now, he’s in Kathmandu.

Does Sandeep Face a Rape Charge? Is it True?

That’s all about Sandeep Lamichhane biography. Here we include his height, age, weight, and personal details about him.